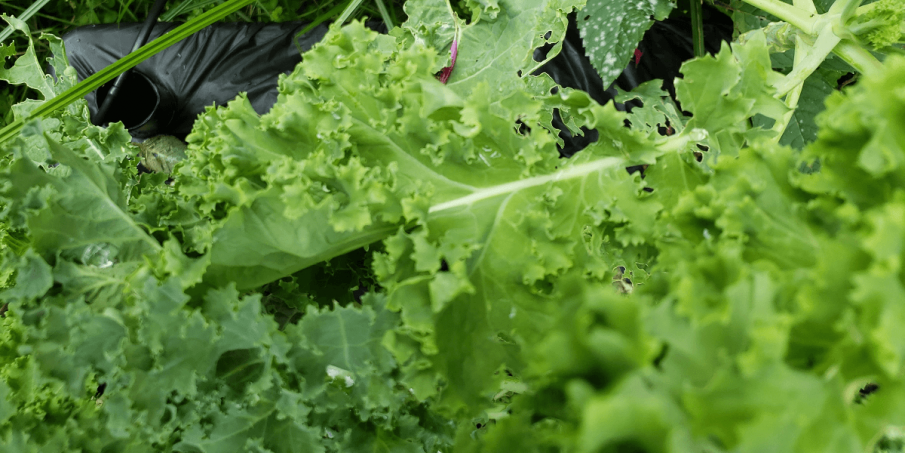 I’ve been using an EarthBox to grow tomatoes, kale, swiss chard, arugula, lettuce, and more for several years. The results have been pretty phenomenal. Especially once I hooked up my irrigation system and set a water timer, delivering water for an hour twice a day to these super-grow environments.

I had never heard of an EarthBox before a friend moved into a condo and decided she didn’t have enough space on her balcony to use her three boxes and so gave them to me. I admit that, at first, I just thought these were glorified, over-hyped, giant tupperware-wanna-be planters. But the folks at EarthBox have really figured something out with this system. Follow the  simple instructions and you — and more importantly, your veggie plants — can’t lose.

(This post may contain affiliate links. Check out our affiliate disclosure for more info.)

When I started growing veggies in an urban setting friends warned, “don’t plant directly into the soil! Your kale will be full of lead!” It doesn’t take much Googling to learn that you do, indeed, risk eating contaminants when you tuck into vegetables grown in dirty dirt. And dirty dirt is more than likely abundant in your urban garden. Residual lead from the good old days of lead gasoline at the pumps and other pollutants and contaminants are common in urban soil and so will end up in your dinner salad. No thanks!

Also, we have a feral cat colony that lives about four doors down from us.

We love this colony! The City’s rat population, in our alley anyway, is pretty much non-existent because of it. They kill and eat a lot of rodents — and deposit the evidence of all that good eatin’ all over my property. I know: gross! But apparently even that helps keep the rodent population down; the critters get a whiff of these calling cards and stay clear. Note that it doesn’t take a village of feral cats to fertilize your garden in ways you don’t want. Indoor/outdoor Fluffy and Boo-Boo-Kitty from next door are also contending for Pooper of the Year in your vegetable garden.

Planting in a container removes the risk of unwanted and harmful grossness inside of your food. You dictate what’s in your growing environment, from dirt to fertilizer to plant. EarthBoxes come with what looks a lot like a gigantic rectangular shower cap – the mulch cover — that is meant to keep moisture in the box. I also like to think that this acts as a barrier, protecting the soil from bad things falling onto it and working their way to the roots of my veggies. Maybe not, maybe so. Whatever the case may be, I sleep better with that idea in mind.

EarthBox vs regular old planter – is it all just hype?

I think the secret to the super growth you can achieve with the EarthBox is in the under-dirt reservoir of water created by the aeration screen’s placement within the box. The screen hovers above the bottom of the box, leaving a space where water, which you pour into the box through the fill tube, collects. That reserve of H2O means your plants drink all day long. Nice.

Tomatoes in particular seem very happy with this set-up although I’ve found that if I don’t add water daily our tomato plants droop big time. When I clued into irrigation, the combo of EarthBox plus regular twice a day watering relegated droopy tomato plants to a thing of the past. Niiice.

Right now I have about ten EarthBox mulch covers – the shower caps mentioned above – in my garage. When you buy EarthBox Replant Kits you get two covers in the kit, even though the kit only provides one bag of fertilizer and one bag of dolomite — enough for one EarthBox. Weird. Wasteful. Not like. If, like me, you have a stockpile of mulch covers and want to avoid the waste try PowerGrow System’s Replanting Kit for EarthBox & Container Gardens – Dolomite Lime + Fertilizer. This is just the dolomite lime and fertilizer you need, enough for one EarthBox. Costs about $12 delivered. 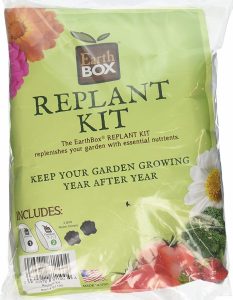 The EarthBox brand has been around for a long while now. There are a lot of knock offs out there. If I were actually buying a system like this today, I would definitely go toward the knock off and save some money. I do think EarthBox has cornered the market on the idea (if that’s possible?), but I don’t think they execute the idea any better than the cheaper versions you can find at a Lowe’s, Home Depot, or your local nursery/garden/hardware store. 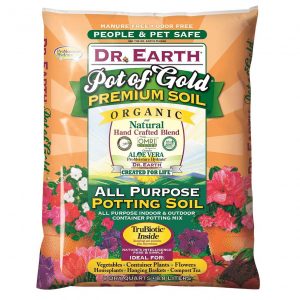 I admit that I can sorta get a little funky about the cost of organic fruits and vegetables. I’m looking at a gorgeous red beefstake tomato that costs $1/lb., and a then I’m looking at another beefstake tomato that looks identical but has an “ORGANIC!” sticker on it and so it’ s $4.99/lb. I mean – whuuu? Even with my “who y’all think is the Passionate Chump here?” attitude at Whole Paycheck (and yes, I’m shopping at Whole Paycheck so what do I expect? I get it!), I do have respect for the concept of organic food. Well, when you grow your own food you can actually pull one over on the man. Simply use organic soil. It does cost a little more than non-organic soil, but I imagine an economist could work out the numbers for us and it would come out to quite the savings when you compare the cost to you of all your homegrown in organic soil beefstake tomatoes to buying ones with a sticker on ’em claiming same at the store. My go to is Dr. Earth Pot of Gold Premium Potting Soil. This stuff looks great, feels great, and grows great. It even smells great. And note that it’s manure free (see above re: cat poop). Seriously – you will notice the difference.

How much to plant

Tomatoes: We grow grape or cherry tomatoes every year. When we started out we did four tomato plants in one EarthBox. While we got a ton of tomatoes from this, the plants were really cramped and just didn’t look so happy or healthy. Since they are in my flower garden, ugly plants didn’t work for me. We moved down to three, and finally to two plants in one box and this seems to be the sweet spot. We get oodles of tomatoes — as many as we did with four plants.

Kale and other leafy greens: We grow all types of kale. We’ve also grown red lettuce, green leaf lettuce, romaine lettuce, butter lettuce, spinach, arugula, swiss chard, and collards. We typically plant 6 plants per EarthBox and that gives us plenty of greens for months. It doesn’t matter what kind of leafy veggie we try, we get a successful and prolific harvest all season long.

And you? Have you had experience growing veggies in an Earthbox? Were your results better/same/worse than you thought they’d be? Would love to hear from you – leave a comment!

This site uses Akismet to reduce spam. Learn how your comment data is processed.